Ecological conditions: Leping pig is found in the regions around Boyang, Wannian, Dexin, Wuyan and Jindezhen Towns, Leping county of China's Jiangxi province. The central production area lies in the valley of Lean river where the weather is warm and rainy. It has average temperature of 17.9818Bc, average rainfall of 1687mm and 257 non-frost days annually. The main local crops are millet, wheat, rice, legumes and sweet potato. Crop by-products are abundant and together with aquatic plants, provide the basic feeding materials for Leping pigs.

Local residents traditionally raise pigs and for many years have been practising selective breeding. Leping breed was developed gradually by these traditional selection practices and under conditions described above. According to classification of Pig Breeds in China, Leping Pig falls within the Central China type (Lai et al, 2001; Zhang et al, 1986).

Characteristics: Leping pig is characterized by a big-size head, wide forehead, concave and wrinkled face, big and drooping ears, short and slightly tilted mouth, short and thick neck. The body characters are as followings: wide shoulder, flat and straight back or waist, big and curved abdomen, chubbiness-lacked buttocks, strong limbs, fair and stiff shell of hoof and goffered skin. The color of hair is black interspersed with seven white parts namely, the tip of tail, abdomen and the underside of four limbs. As a result, it is refered to as "snow covered with black cloud". The sow has an average number of 14 teats.

Production performance: Leping pig attains sexual maturity very early: the boars show the sexual behavior at the age of only one month and can successfully mate at the age of 3-4 months, but are best used for mating at the age of 8 months when their weight is about 60-70 Kg and can be used for reproduction for 3-4 years. Gilts initially show oestrus at the age of 4 months. The average litter sizes at first, second and third parities are 9.47, 11.82 and 12.47, respectively (Lai and Huang, 2001).

The average daily weight gain of Leping pig can reach about 500 kg under good nutritional conditions, where high energy and low fibrous feeds are used. When fed on low energy and high fibrous feedstuff, average daily gains of more than 390g can be achieved. The pig is as well adapted to coarse fodder as other Chinese local pigs. The dressing and lean meat percentages are 72-74% and 38.3-44.4%, respectively when slaughtered at the age of 8 months. 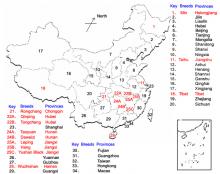