Origin and distribution: The breed is thought to have originated from a variety of West African Savannah Shorthorn with some zebu influence. The breed is also known by other names viz. Ghanaian Shorthorn, Gold Coast Shorthorn, and WAS (but ambiguous) (DAGRIS 2005). These cattle are distributed everywhere in Ghana, but they are particularly concentrated in the North, especially towards the northwestern boarder around Bole, Wa, Lawra and Tumu. The northern part of Ashanti region is another area of concentration. Relatively pure Ghana Shorthorns are also found in reasonable numbers around Bouna in neighbouring Côte d'Ivoire, and near Gaoua in Burkina Faso. There the cattle are still pure, while to the northeast they have become influenced by the zebu.

Physical characteristics: The Ghana Shorthorn is a small animal, with a wither height of 105-118 cm and good beef conformation. Its head and neck are both long, but the neck is thin and the forehead flat. It has short and thin horns, averaging 20 cm in length (Aboagye et al. 1994). Polled Ghana Shorthorns are rare. The top line is concave, with a rising rump. The hump is absent and the dewlap poorly developed, which is typical of Bos taurus cattle. Ghana Shorthorns vary considerably in colour markings: black-and-white animals are common, in addition to other colour patterns such as solid black, white and mottled black-and-white.

Savannah type Ghana Shorthorn cows at the Kpong Agricultural Research Station in the derived savannah of the eastern region have longer (123 vs. 111 cm body length) and deeper (147 vs. 139 cm chest girth) bodies than the Dwarf (forest) Shorthorns at the University of Science and Technology Farm at Kumasi in the humid forest zone. They are also taller (109 vs. 99 cm) than the latter (Aboagye et al. 1994).

Peculiarity: The Ghana Shorthorn is considered to be tolerant to trypanosomosis and tick-borne diseases, and adapted to the harsh hot and humid tropical climate. The presence of these animals in the tsetse belt indicates that they have some degree of trypanotolerance, at least relative to the zebu types (Maule 1990). The Ghana Shorthorn has good heat tolerance with substantial individual variation (Kahoun 1971; Maule 1990). They also have a quiet disposition.

Breed status: By 1990 their number was estimated to range from 547 000 to 839 000 and in 1993, the estimated population was 910 105 (DAD-IS 2005). Other estimates by Aboagye et al. (1994) was 599 000. Traditionally children in villages attend the herds where no milking takes place. Until 1987, 99% of the Ghana Shorthorn had been kept in this way. Recently some cattle are being owned by town dwellers and they employ Fulani herdsmen to look after and milk the cows. The breed is not at risk of extinction.

Utility: The breed is used for meat, milk and draught. It gives the lowest milk yield than all other indigenous breeds of Ghana; for instance, only 44 kg is produced in 29 days when the cows are directly milked on station. In general, Ghana Shorthorn cows do not let down milk in the absence of their calves. Using the weigh-suckle-weigh method, milk yield ranges from 384 to 774 kg (mean±s.d = 656.9±183.6 kg) over lactation periods ranging from 182 to 295 days (mean±s.d = 261±53 days) on station (Rege et al. 1994b). The highest yield was obtained when, in addition to 24 hrs access to grazing, cows were fed a concentrate mixture composed of 60% maize or maize bran, 40% groundnut cake and minerals at a rate of 1.8 kg per head per day (Rege et al. 1994b).

The Ghana Shorthorn responds to higher levels of nutrition. Even though the maximum genetic potential of these cattle is not really known, Rege et al. (1994b) reported a variation in lactation performance of cows from a milk yield of 5 kg produced over a period of 9 days to 3059 kg over 454 days. Thus there is a great potential for genetic improvement [CS 1.9 by Aboagye].

The breed has good conformation for meat production and yields good beef carcass. Under traditional management mature weight for 23 females was reported to be 187.3 kg (range = 170-200) whereas males at 36 months of age was 250 kg, on station they may reach 380 kg. Birth weights range from 17 to 20 kg. Weaning weights vary from 64 to 154 kg according to weaning age (7-9 months) and management. Dressing percentages are between 50 and 53. Calving intervals are 15.4-18.6 months for the Dwarf Shorthorn and 14.8-16.7 for the Savannah Shorthorn; however in an improved condition this can be as low as 14 months (Rege et al. 1994b).

Cumulative calf mortality to one year is 35 to 45 percent in village herds and 10 percent in ranches (Aboagye et al. 1994). This is clearly due to the difference in nutrition and health management between the two systems. Mortality rates for 1-2 year old calves of 10-15% and 3-4% were reported under village and ranching conditions, respectively (Aboagye et al. 1994). 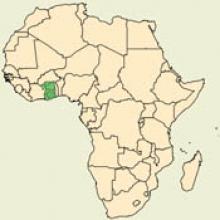 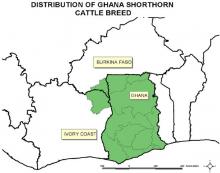